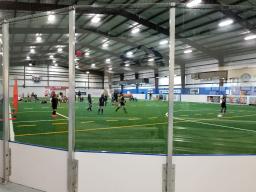 Apex Sports Center is located in Mansfield, Texas and is one of the premier indoor soccer facilities in North Texas. We are open for business year round offering soccer leagues for both youth and adult players. Apex has a state of the art indoor field (85' x 200') that is played on our Prestige Turf. Prestige is a synthetic artificial surface that is designed to simulate real grass and offer a better playing experience.
Apex Sports Center amenities include a, full size concession stand, a private room for birthday and team parties. In addition to our league play, we offer building and field rentals, soccer camps/clinics, and tournaments. 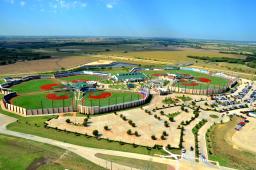 Opened in March of 2008, this sports park, built and owned by the city, and operated and maintained by Big League Dreams, provides fields for youth and adult baseball and softball games. The indoor pavilion is available, not only for soccer, but also for meetings, banquets and special events. The replica fields at Big League Dreams Mansfield include Wrigley Field, Sportsman's Park, Ebbets Field, Crosley Field, Yankee Stadium, Fenway Park, Polo Grounds, Rangers Globe Life Park in Arlington. The two sports club restaurants offer full dining and feature windows looking out onto each field. The facility also features synthetic turf fields on all eight fields, batting cages, a playground, and a pro shop. 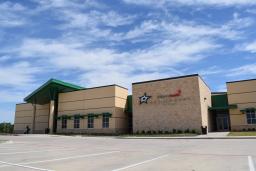 The newest addition to the Mansfield sports scene brings two full-sized ice rinks to town. The Mansfield StarCenter also features team rooms and meeting spaces that can be used for parties and corporate events.
Host to numerous hockey tournaments, skating and hockey training programs and open skating times where anyone in the community can come shred some ice. 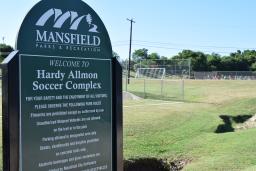 Originally named "Magnolia Park", the north soccer field was developed in 1984. In 1987, the south soccer field was developed and the park was renamed after former city council member and long-time resident, Hardy Allmon. In 1989, irrigation was installed on both fields. The park was used as a game facility by the Mansfield Soccer Association (MSA) until the Mansfield Sports Complex opened in 1996. Currently, the north and south fields are used by MSA soccer teams for practices. This facility serves as a trail head connection to the Walnut Creek Linear Park. Hours of operation are 5am - 9pm. 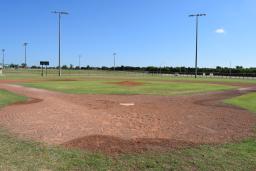 This multi-use facility opened in 1996 and was funded through the Mansfield Park Facilities Development Corporation with half-cent sales tax revenues. The facility is used mainly by the Mansfield Youth Baseball Association (MYBA) and the Mansfield Soccer Association (MSA). This site also hosts numerous youth tournaments. The park has nine lighted baseball fields and eight soccer fields, five of which are lighted. Other amenities include a playground, three covered shad structures and concession/restroom facilities. Hours of operation are 5am - 11pm. 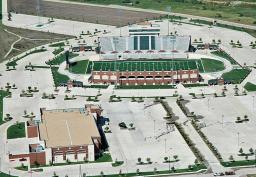 Part of the Mansfield ISD Athletic Complex, Vernon Newsom Stadium is one of the best high school fields in Texas. Features include a ten story press box, state of the art Jumbotron, a 2000 square foot community room and two locker rooms, each over 900 square feet. The stadium seats over 11,000 spectators and the field is top of the line Prestige XT Evolution Turf.
Click Here for more information. 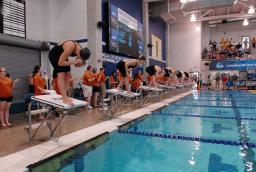 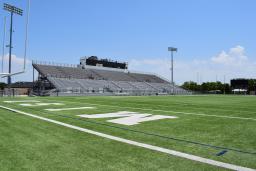 Mansfield's original football stadium, R.L. Anderson still serves as one of the best locations for High School Football in Texas. Located just minutes from Historic Downtown Mansfield, this legendary field was renamed in 1989 for Mansfield ISD teacher and counselor, R.L. Anderson, who attended every game for 33 years and served as the stadium's PA announcer.
In 1997 the stadium was given a $1.4 million facelift to modernize the stadium. Seating capacity is 9,000 and bathrooms and concessions are on site with plentiful stadium parking.
Click Here for more information.

These soccer fields were constructed in 1989 as a joint venture between the Mansfield Parks Department and the Mansfield Soccer Association (MSA). The park is named after Philip Thompson, a former resident and soccer coach who died of cancer. It was originally used as a game facility by MSA until the Mansfield Sports Complex opened in 1996. Currently, the eight acres of irrigated fields are used for practice by MSA soccer teams. In 2007, lights were added and two game fields were created. Hours of operation are 5am - 11pm.

Great for when you need information on the go