Brenda Norwood: From Segregation to Celebration 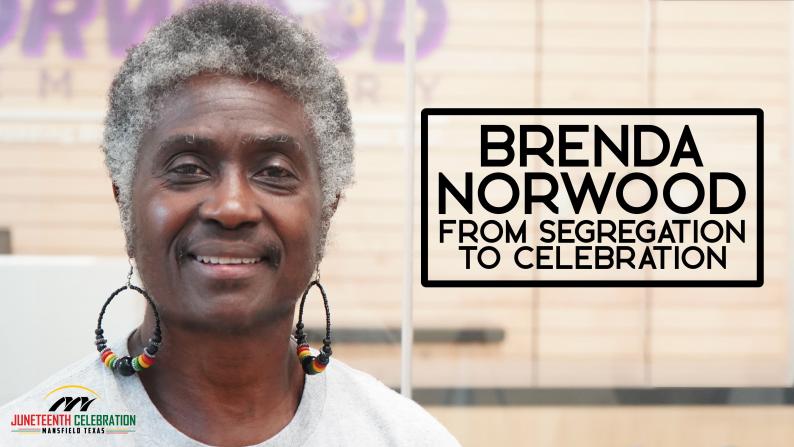 Mrs. Brenda Norwood has lived in Mansfield, TX, her entire life and was a part of the first integrated class to attend Mansfield High School in 1965.
Mrs. Norwood has been married to her husband, Mr. Norman Norwood, for 41 years. Together they started the Juneteenth celebration in Mansfield and have been hosting the event for over 30 years.

"Our purpose is to come together as one," Mrs. Norwood said.

Mr. Norwood said the event first started in their yard and eventually was moved to the park. Although it took a while to build their attendance, they had over 600 people one year with proper advertisement.
"Growing up, my dad taught me to give back. We are giving back to the community," Mr. Norwood said.

The Norwoods funded and supplied everything for the event. They passed out flyers, had shirts made, provided food, and entertainment.

"We start at the beginning of the year planning Juneteenth," Mrs. Norwood said.

Mrs. Norwood said it takes a lot to put together this event and it is not thrown together at the last minute.

Due to the pandemic, the Norwoods decided to take a step back from planning. The Norwoods will be a part of future planning, but until then Della Sapp has stepped in to keep the tradition going.

Della Sapp, a Mansfield native who owns her own home health business, learned that Mrs. Norwood would not be hosting her Juneteenth celebration this year and wanted to keep her tradition going.

"We want to keep the legacy of Mrs. Norwood," Sapp said, "She's going to be very happy to see all her hard work not dying."

Juneteenth is a holiday that celebrates the ending of slavery in the United States. The Emancipation Proclamation officially freed slaves in Texas on January 1, 1863. Even though slavery was abolished, enslaved black people were not free until June 19, 1865. This is where the name Juneteenth comes from.

Mrs. Norwood said they always focused on the history of Juneteenth during the celebration.

"When a person would come, and they knew nothing about Juneteenth, they would know a whole lot when they left," Mrs. Norwood said.

Mrs. Norwood grew up in what was considered "Black town," this was where the Black community lived in Mansfield. This area did not receive running water until 1974, so Black people had to go to Downtown Mansfield, to a pumping station in order to get water. It cost 10 cents for a barrel of water.

"That was the way of life," Mrs. Norwood said.

Growing up in segregated schools, Mrs. Norwood had to walk to school every day because Black students could not ride the bus. Despite the harsh treatment, her mother did not allow her to miss school.

Mrs. Norwood said her mother taught her when things like this happen, to not walk around and be angry at the world.

Mrs. Norwood is known as a trailblazer in Mansfield ISD's history. According to Mansfield Magazine, she was the first to graduate from an integrated high school in 1966, she was also a teacher within the district for more than 40 years.

Norwood was the first African-American employee of MISD with more than 40 years of service. On August 7, 2021, an elementary school will be named to honor her, Brenda Norwood Elementary School.