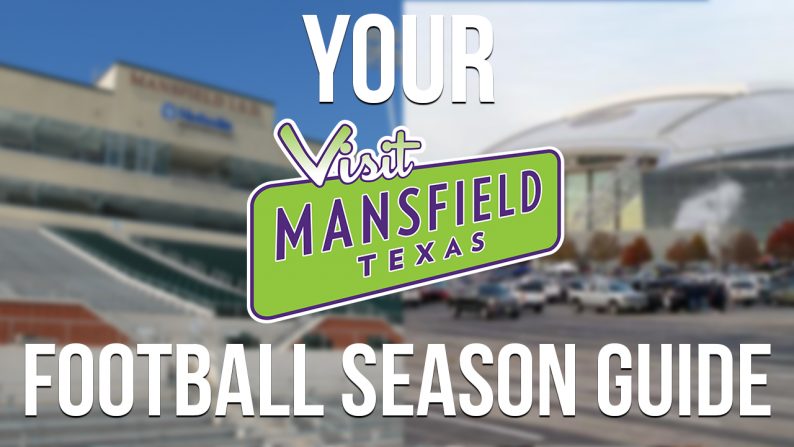 Football season is back and Mansfield is at the center of it all at every level of the sport. The Eyes of Texas High School Football will be on the city August 29th through 31st when the Border Brawl kicks off. Five of the best teams from the Tulsa, OK area will be in town to face off against Mansfield's five teams. The five games will be played at Mansfield ISD's two top tier arenas: R.L. Anderson Stadium and Vernon Newsom Stadium.

But it's not just high school. Mansfield is perfectly located just 20 minutes south from AT&T Stadium. If you're coming to the area for one of the major college football games like the Advocare Classic, Southwest Classic, Big 12 Championship or Goodyear Cotton Bowl, Mansfield makes the perfect spot to stay.

Of course, the main attraction at AT&T Stadium is its home team: the Dallas Cowboys. Thousands of fans flock to North Texas every year to watch America's Team and when they stay in Mansfield their trip comes with an added bonus: a free shuttle to and from the game.
That's right, Visit Mansfield sponsors a free shuttle bus that picks up guests that are in town to attend the Cowboys game when they stay in a Mansfield hotel. No expensive parking fee, no fighting through traffic and no bickering over who the designated driver is! For more info check out the video below:

Now, maybe you're not in town to attend a game but you need a spot to watch some football surrounded by some new best friends! We've got you covered there with some of the top spots to grab some food, a drink, and take in some pigskin:

Fat Daddy's (781 W. Debbie Ln.) – A massive sports bar with nearly 30 HD TVs, a 165" projection screen TV, and two outdoor patios, so you won't miss a moment of action. Not to mention they have live music five nights a week for when there isn't a big game on.

BFF Asian Grill & Sports Bar (1601 E. Debbie Ln.) – An Asian fusion restaurant with a more laid back atmosphere, but still plenty of screens to catch the game. Over 100 craft beers on tap, so there will definitely be something you like.

Dirty Job (117 N. Main St.) – Just named one of the best craft breweries in the area, Dirty Job is perfectly located right in the middle of Historic Downtown Mansfield. With their own original brews on tap and weekly football watch parties planned it's an awesome place to grab a drink and catch some Cowboys action.

Category:
Things to do